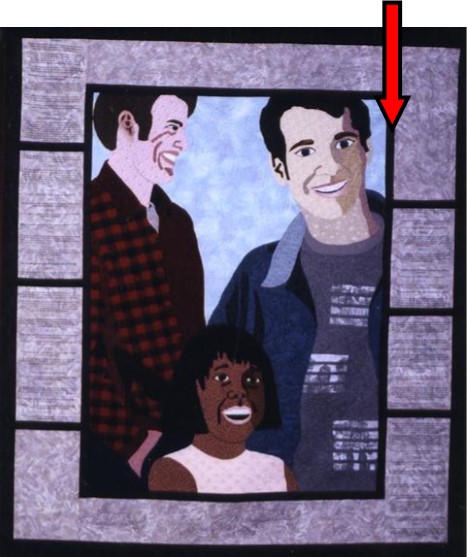 I thought it might be fun to share with you the problems that have occurred in my quilts. How I fixed the error so even the viewer would have difficulty in knowing something went wrong.  Let Freedom Ring was done for a special exhibit in 1998. I always quilt the inside of the quilt first.  Adding the borders, backing and batting later. I do this because it is difficult to get a straight line on the inside edge. The borders were printed on the computer with the doctrine of the United Nations. The border was then quilted in 2 sections. A side and a top and a side and a bottom. Attaching it with the strip that the arrow points out. It laid beautifully. So I thought it needed some quilting on that small black strip.  WRONG. Big mistake. It caused the inside to pucker.  I am fussy. So I had 2 choices.  One …. Rip out the stitching or … Two ….Try to stretch it out. Fortunately for me I had used wool batting. Wool does not have amnesia. You can stretch it and it will stay stretched. Not a lot, but enough to solve this problem. I took the quilt out to the dock, hosed it down and tacked it to the dock. Stretching and straightening. until it was correct. I put chairs on the dock to keep the dogs from running all over the fabric. And I let the dogs out to keep the pelicans and herons from pooping on it. Let Freedom Ring used to hang in the Pinellas County Court House and now it happily resides at Stetson College of Law.

*note:  The black in the background it not part of the quilt. 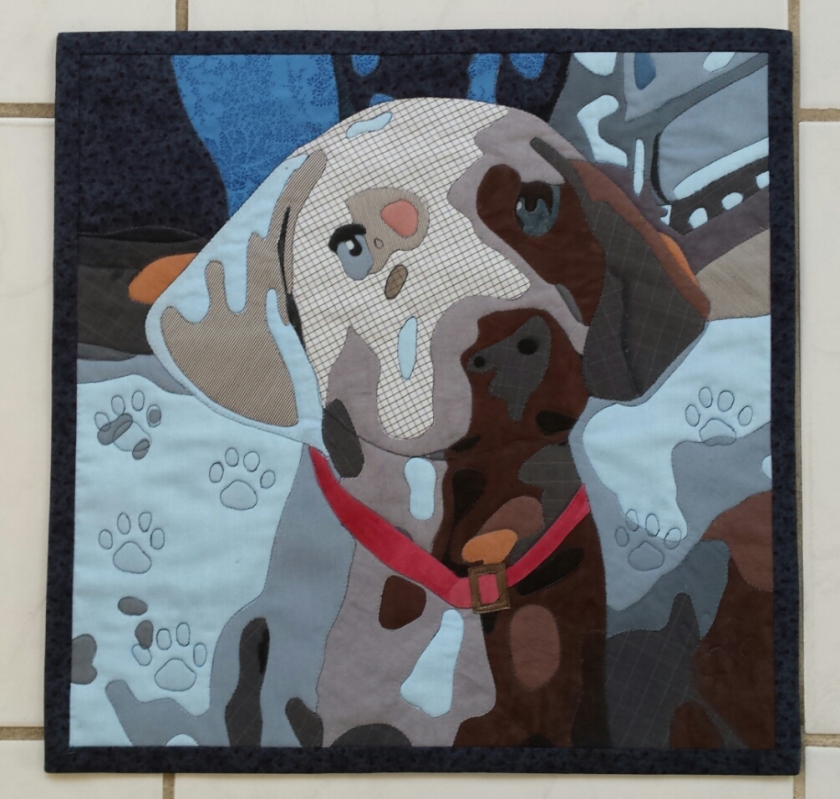 Innocent Until Proven Guilty is one of 3 quilts that are up for auction at the Quilt Alliance. http://www.benefitbidding.com/auctions/listings/details.cfm?item_id=46929

Stop by and visit the other 2 and make a bid.

Evie here. (Mom’s Alter Ego)  Holding on to a new purse.  This is made from old velvet log cabin blocks and a vintage shoe buckle. The pattern will be available soon at the We Love to Sew … Bernina web site. Can’t decide whether it needs a strap or not. To Clutch or not to Clutch … that is the question.